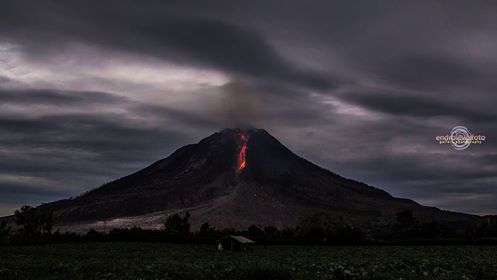 Canlaon (Central Philippines): The volcano remains restless. A small explosion occurred Saturday morning at 09:19 local time.
According to PHILVOLCS, the eruption which lasted less than 30 minutes was entirely steam-driven (phreatic or hydrothermal), i.e. caused by overheated ground water flashing into steam inside the hydrothermal system overlying a (probably small) body of magma, but no magma itself was projected to the surface.

Sinabung (Sumatra, Indonesia): The volcano continues to erupt with little changes – effusing viscous lava at slow pace and feeding a prominent lava lobe on the SE flank.
A small collapse of parts of this last night caused an incandescent avalanche documented by avid Sinabung volcano-follower and photographer Endro Lewa.

Kilauea (Hawai’i): HVO reports no significant changes in the eruption.
The new lava flow headed to the SE from Pu’u O’o continues to advance fast. During the past week, it made progress of 1200 meters, i.e. on average almost 200 m per day.

Its front is currently approx. 6 km from the coast and it is headed currently towards the Royal Gardens area, where it will meet steeper ground on the Pulama pali which likely will speed up its advance before slowing down again once in the vast coastal plain. If the current advance continues, it will take about 10 days to reach the top of pali, HVO wrote. Whether and when new lava will eventually reach the ocean is impossible to predict: the road to there is still long. However, chances of this happening within the next few months are quite high and increasing.
At the summit, the lava lake inside Halemaʻumaʻu’s inner pit crater continues to circulate and spatter, and its surface is currently approx. 30 m below the crater floor. Seismic activity across the volcano has been low recently. The long-term deformation trend shows continued inflation beneath the summit and uppermost Southwest Rift Zone.

Santiaguito (Guatemala): Following a relatively calm period of 3 weeks (no significant eruptions since 25 May), a powerful vulcanian explosion occurred at the Caliente lava dome again yesterday at 09:15 local time, sending an mushroom-shaped eruption column approx. 5 km into the sky.
Pyroclastic flows descended the base of the cone and ash falls occurred in downwind areas (as usual) to the west and southwest, including the towns and villages of Loma Linda, San Marcos Palajunoj, San Felipe Retalhuleu, El Nuevo Palmar and others. No evacuations were ordered and no significant damage was reported.