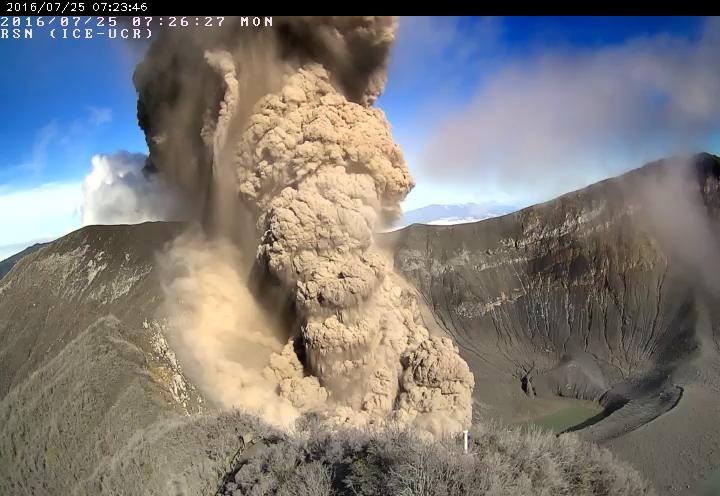 Sakurajima (Kyushu, Japan): After more than 3 weeks with no recorded eruption, a strong vulcanian-type explosion occurred this evening at 00:02 past midnight (15:02 UTC).
The initial estimate of the ash plume was corrected from 10,000 to 20,000 ft (6 km) altitude, making the event one of the larger ones among Sakurajima’s long list of vulcanian explosions throughout the past years. Whether or not the volcano will return to a more regular style of explosive activity remains to be seen.

Sinabung (Sumatra, Indonesia): Explosive activity continues. The most recent eruption was reported by PVMBG and VAAC Darwin yesterday at 10:28 local time. It generated an ash column that rose approx. 1500 m above the volcano’s summit.

Mauna Loa (Big Island, Hawai’i): The volcano is not erupting, but continues to show unrest. Deformation and seismic activity remain above long-term background levels.
According to HVO’s latest update, earthquakes at Mauna Loa during the past week “occurred beneath the west and north flanks of the volcano mostly in the 5 – 11 km (3 – 7 miles) depth range. In addition, earthquakes are occurring in south caldera and upper Southwest Rift Zone at depths less than 5 km (3 mi).

Global Positioning System (GPS) measurements show deformation related to inflation of a magma reservoir beneath the summit and upper Southwest Rift Zone, with inflation occurring mainly in the southwestern part of the magma storage complex.”

Kilauea (Hawai’i): The 61G lava flow southeast of Pu’u ‘Ō’ō remains active in the coastal plain and its most advanced front was 730 m (0.45 miles) from the ocean yesterday morning (local time on Hawaii).
At the summit, the level of the Halema’uma’u lava lake has risen a bit and was 21.5 m (70 ft) below the crater rim. Parts of it have again come sometimes into view from the volcano observatory’s public viewing terrace.

Turrialba (Costa Rica): A series of eruptions has been occurring from the volcano’s active western crater during the night and this morning and is likely still going on.
Costa Rican volcanologist describe the explosions which each lasted a few minutes as phreatic, i.e. driven by overheated water from the hydrothermal system suddenly flashing into steam. The first explosions occurred at 21:22 and 22:16 local time last night and were followed by similar ones at 07:22 and 08:25 this morning.
The eruptions were similar to many others in the ongoing phase of intermittent explosions at the volcano during the past months; they ejected ballistic blocks of high temperature to the crater rim and generated ash plumes that rose several hundreds of meters before drifting SW where ash fall occurred in nearby areas.