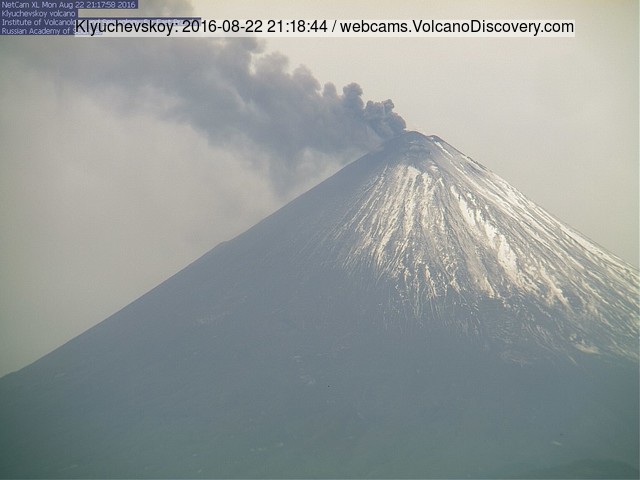 Klyuchevskoy (Kamchatka): The eruption of the volcano continues with the effusion of a lava flow on the eastern flank and intermittent explosive activity at the summit.
A phase of near-continuous small to moderate explosions occurred last night (this morning in Kamchatka), generating an ash plume that rose to 23,000 ft (7 km) and drifted southeast.

Chikurachki (Paramushir Island): KVERT lowered the Aviation Color Code back to green.
No more signs of eruptive activity (ash plumes, thermal anomalies) have been detected during the past days, but according to KVERT, a “moderate gas-steam activity of the volcano continues.”

Sinabung (Sumatra, Indonesia): Small to moderate explosions continue to occur at rates of once or twice per day on average.
Yesterday morning (08:53 local time), an eruption generated an ash plume that rose 1300 m above the summit and dissipated into easterly directions. A small pyroclastic flow also descended the eastern flank and reached 1500 m length.

Sabancaya (Peru): The volcano remains restless. A strong emission of steam with some ash occurred this morning. In its latest report, IGP reported only low internal (seismic, deformation) and surface activity (degassing) of the volcano during the first half of August.
The Volcanic Ash Advisory Center Buenos Aires (VAAC) issued the following report: VA REPORTED AT 23/1311Z OBS VA DTG:23/1345Z

Villarrica (Central Chile): The volcano has increased its activity during the past two weeks: glow from the summit has reappeared in early August and become more pronounced lately.
This suggests a rise of the magma column in the conduit where a small lava lake is often present (typical for the volcano) and/or spattering or small strombolian activity.
Satellite-based measurements of heat output also show an increase recently.